What are Tic Disorders?

A healthy child does not continuously worry about unpredictably doing something embarrassing, but a child with a chronic tic disorder is often anxious that the unintentional movements or noises they make will draw attention to themselves.1 A tic is a sudden, rapid movement of some of the muscles in the body or vocalization that occurs over and over and doesn’t serve any purpose.2 The location, frequency, and complexity of tics can change over time.3 In most cases tics decrease during adolescence and early adulthood, and sometimes disappear entirely.4 Often the social and emotional consequences of the behavior problems associated with tics are more impairing and disruptive than the tics themselves. Tics can impact children’s social relationships and self-esteem, putting them at greater risk for having poor peer relationships and becoming withdrawn and aggressive.5 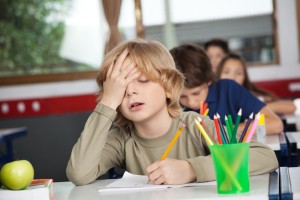 Children with Tourette’s Syndrome and Persistent Motor or Vocal Tic Disorder are able to suppress tics for varying periods of time, particularly under social pressure or when they are deeply focused on a task or activity. When children and teens are not suppressing their tics parents and teachers may think that they are “choosing” to tic, that their tics are intentional or habits that can easily be stopped, but this is not the case. Tics appear to be sensitive to environmental stimuli and can be worsened by temperature changes, stress, illness, and fatigue.6

There are two classifications of tic disorders, chronic and transient, chronic conditions are long lasting and include Persistent Motor or Vocal Tic Disorder and Tourette’s Syndrome, transient tic disorders only last for a relatively short period of time. Prevalence rates for all tics (chronic or transient) range from 6-18% for boys and 3-11% for girls.6

Tourette’s is a neurobehavioral disorder characterized by a chronic inability to suppress an urge to perform patterned, repetitive movements.9 The common occurrence of dual diagnoses among children and teens with Tourette’s may be due to the shared genetic relationships between obsessive-compulsive disorder, ADHD, and Tourette’s.10 Tourette’s may also be linked to abnormalities in the brain, especially the basal ganglia, which helps to regulate one’s body and eye movements.1 But researchers are yet to find a single cause of tic disorders.

What can be done to treat Tic Disorders?

Research supports treatment using habit reversal training, a behavioral therapy, as well as family emotional support and an appropriate educational environment for children with tic disorders.3 The use of cognitive behavioral therapy (CBT) to treat tics has been shown to be as effective as and even superior to medication in certain cases. CBT has an effect not only on tics, behavior, and thoughts, but also on brain activity.11 Tics can indicate the presence of atypical neurodevelopment, it’s important for anyone who is newly diagnosed with tics to have a thorough medical and neurological exam to rule out any other condition that may cause similar symptoms.2,9

Interventions that may be used in treatment:2,5